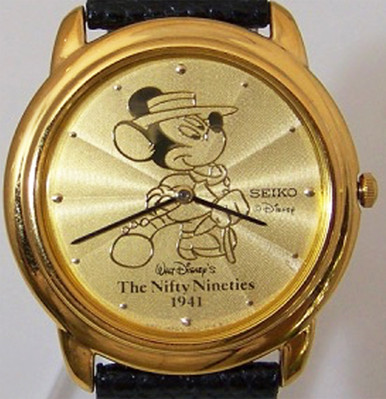 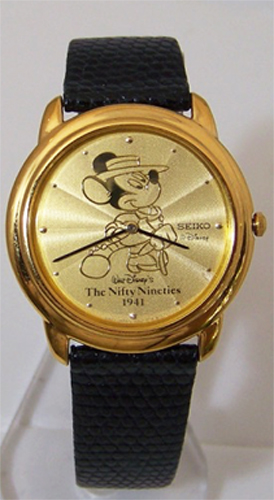 Mens: ONE ONLY -- You are purchasing the actual item shown. Listed on multiple sites, it will be pulled from all sites once sold

The Nifty Nineties classic film portrays Mickey and Minnie meeting in the 1890s and attending a Vaudeville show that includes a number by 2 song and dance men, Fred and Ward. These are caricatures of famed Disney animators Fred Moore and Ward Kimball who are the voices for their characters. Later Mickey and Minnie travel the countryside in a Brass Era Car until they crash it into a cow. They emerge unhurt but when Mickey tries to apologize to Minnie by offering a kiss to the cheek, the cow sticks his head in between them.

The padded case has corrosion on the metal around the rims from age. The case back of the watch has some minor visible scratches commonly occurring during battery changes. This is however a new, unworn, working watch. It is the only one we have and is discounted due to some of the case corrosion on the padded display case.

This item is IN HAND: Don't get caught waiting on a drop shipper who must first go out and buy your item (assuming they are still available!) Item ships US Priority mail, insured with Tracking.